Soldering enables modern electronics. Without solder, electronics would not exist. Copper melts at 1085°C, yet with solder, we can bond copper to copper at about 235°C or less with current lead-free solders. These lower temperatures are required, as electronic packages and PWBs are made of polymer materials that cannot survive temperatures much above 235°C.

Before the advent of RoHS, tin-lead solders melted at about 35°C less than lead-free solders. So today, soldering temperatures are at the highest in history. For some applications, it would be desirable to have solders that melted at closer to tin-lead temperatures. This desire has increased interest in low-melting point solders, such as tin-bismuth solders. Eutectic SnBi melts at 138°C, so reflow oven temperatures in the 170°C range can be used. These lower reflow temperatures are easier on some fragile components and PWBs and will reduce defects such as PWB popcorning and measling. However, the lower melting point of SnBi solders limits their application in many harsh environments, such as automobile and military applications. As a rule of thumb, a solder should not be used above 80 to 90% of its melting point on the Kelvin scale. For SnBi solder, this temperature range is 55.8 - 96.9°C. These temperatures are well below the use temperature of some harsh environments. In addition, SnBi solders can be brittle and thus perform poorly in drop shock testing.

So, the electronics world could use a solder that can reflow at a little over 200°C, but still have a high use temperature. This situation would appear to be an unsolvable conundrum. However, my colleagues at Indium Corporation, lead by Dr. Ning-Cheng Lee, have solved it. They used an indium-containing solder powder, Powder A, that melts at <180°C and combined it with Powder B that melts at ~220°C. By reflowing at about 205°C, Powder A melts and Powder B is dissolved by the melted Powder A. To achieve this effect, the 205°C temperature must be held for approximately two minutes. The remelt temperature of the final solder joint is above 180°C. I discussed the phenomenon of a liquid metal dissolving another that melts at a higher temperature in a previous post. An extreme example of this effect is mercury dissolving gold at room temperature. So, don’t drop any gold or silver jewelry into a wave soldering pot and expect to fish it out an hour later!

Powder A would not be a candidate on its own as it displays some melting at 113°C and some at 140°C.

Using the criteria above, the use temperature of this new solder powder mix can be in the 89.4 - 134.7°C range, after reflow, as the remelt temperature is above 180°C. Tests performed by Dr. Lee and his team have shown the resulting solder joints also have good to excellent thermal cycling and drop shock performance. This new solder paste is called DurafuseTM LT.

Figures 1-3 show schematically how the melting of the two powders would melt at a peak reflow temperature of 205°C.

Figure 1.  Powder A and Powder B at room temperature. 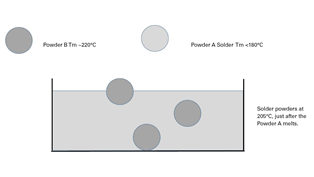 Figure 2. At 205°C, Powder A has melted and it is starting to dissolve to Powder B. 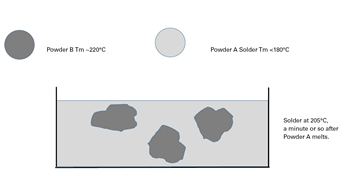 Figure 3. After about a minute at 205°C, Powder B starts to dissolve. Given enough time, it will completely dissolve in Powder A, resulting in a new alloy that has a remelt temperature over 180°C, as well as good to excellent thermal cycle and drop shock performance.

To me, this invention is one of the most significant in SMT in a generation. It could be argued that it is like finding the holy grail of soldering: melting at low-temperature with a serviced life at high-temperature. For more information on DurafuseTM LT, see the blogs posted by my Indium Corporation colleague, Claire Hotvedt.


What Do the Equipment Suppliers Have to Say?