Continuing our series on tin whiskers. In the last post we discussed what they are. in this post we will discuss what causes them.

Tin whiskers are primarily caused by compressive stresses in tin. The most common cause of the stresses is copper diffusion into the tin as seen in Figure 1a. Such diffusion is common when tin is plated, melted or evaporated on copper. Copper preferentially diffuses into tin exacerbating tin whisker production. 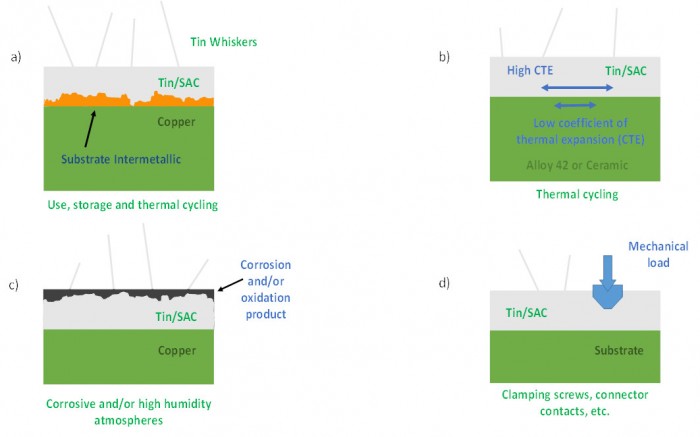 Figure 1. Some causes of tin whiskers

Another cause of tin whiskers can occur when the tin is plated, melted or evaporated on a material that has a lower coefficient of expansion than the tin, such as alloy 42 or ceramic. When temperature increases, the tin is constrained by the lower coefficient of expansion material. This constraint causes compressive stresses in the tin that can result in tin whiskers. See Figure 1b.

Clearly, one way to minimize this type of tin whisker growth is to prevent copper diffusing into tin. In a future post, we will discuss this and other tin whisker mitigation techniques.