The Pareto Chart is a simple way to plot failure data that gives priority to the failure modes with the highest number of fails. This technique was developed by Vilfredo Pareto in the late 1800s to early 1900s. Pareto was studying social and economic data in Italy. He was one of the first to observe the 80/20 rule. In that, about 80% of property in Italy was owned by 20% of the people. Today many people use this rule. I have heard salespeople say that 80% of their business is from 20% of their customers as one of many applications of this rule.

In categorizing fails in electronics assembly, about 80% of fails are in 20% of the failure modes. Let’s look at an example. See Figure 1. In this figure, we have plotted the number of fails versus the failure mode. Note that shorts is the most common failure at about 300, whereas opens is 75, missing components is about 50, and solder balls about 35. 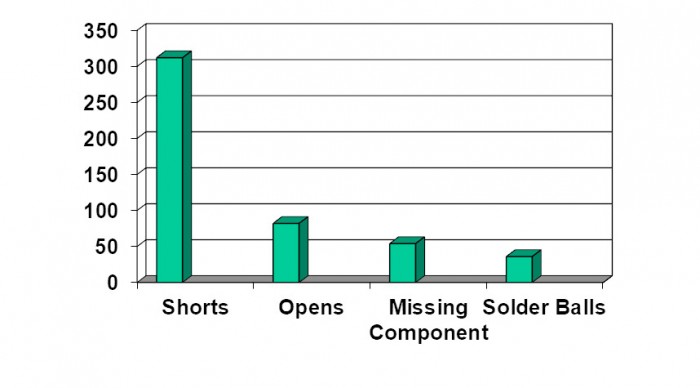 These data should be used to develop a continuous improvement plan. Obviously, shorts should be focused upon first. Typically, one would use process data such as statistical process control (SPC) data to solve the shorts problem, most likely looking at a process metric like the volume of the stencil printed deposit.

I developed a graph similar to Figure 1 when I visited a client. The manager was convinced that solder balls were a big problem. When I asked the quality engineer for the supporting data, he said there was none. So, I asked if they collected failure data; he said they did. I then asked what they did with the data; he said they filed it away having never looked at it!

I asked to see the last several weeks of data and I plotted the data similar to that in Figure 1. It ended up that solder balls was the fourth biggest defect, not the first. As a result of using a Pareto Chart, the company focused on fixing their defect with the greatest number first, etc.

Pareto Charting is a simple yet crucial process in continuous improvement.

High-Reliability... What Do We Want?