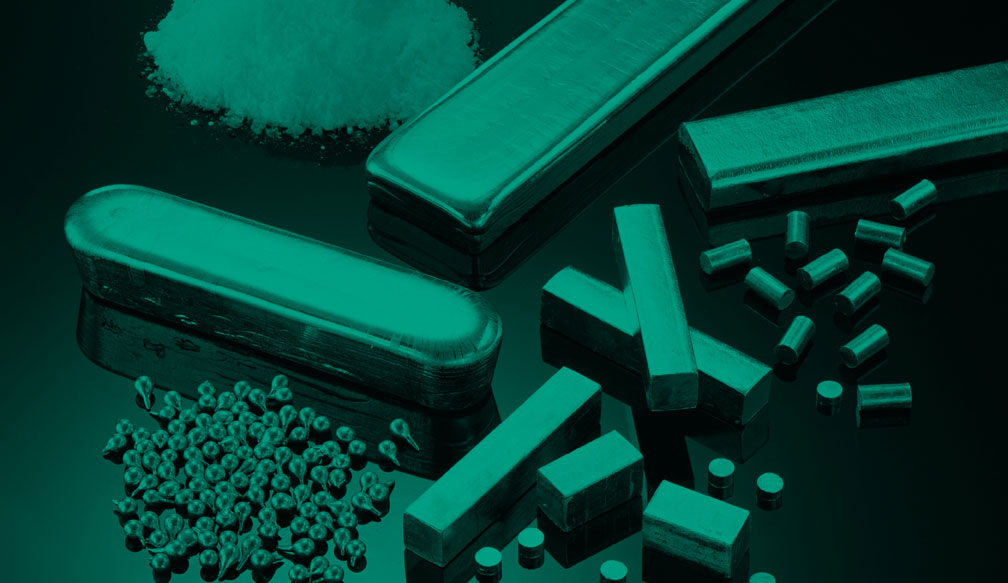 The low-melting point of fusible alloys enables them to attach easily onto workpieces during manufacturing processes and then be quickly melted and removed afterward.

The key property of fusible alloys is their low-melting point, which in turn allows them to be used as helper materials to achieve a certain function. A few examples:

Indium Corporation offers a large number of alloys. The ones classified as fusible alloys have melting points ranging from just above those of liquid metal alloys (i.e., slightly above room temperature) to 150°C and above, somewhat overlapping with solder alloys. Use our Solder Alloy Selector Guide to find an alloy to meet your needs.

When an optical lens is cut for eyeglasses, the lens is held in place with a chuck that is bonded to the curved lens surface. The bond is typically applied to a thin backing film attached to the lens, and the bonding material consists of a fusible alloy.

Fusible alloys enable this type of application because the bond strength is high enough to support the lens grinding operation and hold the lens in place, and the bond is easily dissolved by moderately hot water that will not harm the plastic or glass lens in any way.

The most widely used alloy in this application is Indalloy®116, which melts at 116°F, or 47°C. Our most popular Indalloy® compositions are shown in the table below, and many more alloy compositions are available.

In this application, part of a workpiece gets immersed, or encased, in a block of fusible alloy. The solidified block of material can then easily be clamped while mechanical operations can safely proceed on the material of the workpiece that protrudes from the block.

This is especially useful when workpieces are curved or consist of materials that would be scratched, dented, or otherwise harmed using traditional mechanical clamping.

Fusible alloy workpiece holding is widely used for the finishing of fir-tree fixings that attach turbine blades to the hub of a generator. In general, alloys are used with melting points between 47°C to 138°C.

Our most popular alloys for workpiece holding are listed below, but many more compositions are available.

This chart illustrates a few of the key features of fusible alloys.

This is only a small selection of alloys available from Indium Corporation. For a complete list of solder alloys, please contact us for a copy of our Solder Alloy Directory, which is available by request.

Alloys with unusual low-melting points were first discovered in the 18th century, and they tended to be named after the practitioner that first discovered a particular combination of base metals. It was quickly realized, as material scientists introduced phase diagrams to describe the melting behavior of composite materials, that some particular combinations have a convenient singular melting point—the eutectic point—rather than a range of temperatures where both solid and liquid phases of the different constituents are intermixed at a specific combination.

Some of the early fusible alloys (Field’s metal and Wood’s metal) are still in use today, although they are more commonly known under their Indalloy® numbers (19 and 158, respectively):


Field’s metal had the lowest melting point (60°C) amongst these, but today there are many more low-melting point alloys available. S.Q. Field discovered this alloy composition in 1860.

Wood’s metal includes cadmium, and its eutectic melting point is at 70°C. It was first described by B. Wood, also in 1860.

Rose’s metal is of purely historical significance—it seems to be the oldest documented low-melting point alloy. Discovered by V. Rose in the 18th century in Germany, this alloy’s melting point is at 98°C. It was considered noteworthy at the time because it could be melted with boiling water. While Indium Corporation does not offer this exact composition, Indalloy®42 has an almost identical melting point with a slightly different composition (see table above).

In the 20th century, more and more compositions of these fusible alloys were discovered, and the practice of naming these alloys after their first practitioner fell out of use—there are simply too many of them.

The melting points of 59 individual Indalloy® compositions range between 47°C and 100°C; another 99 compositions have a melting point range from 101°C to 200°C. For a complete list of solder alloys, please contact us for a copy of our Solder Alloy Directory, which is available by request.