Patty and Mark chatted for awhile and reviewed some of the data that Mark was analyzing.

“Mark, to simplify it, let’s assume that you are comparing a transfer efficiency (TE) to another; say you have taken 100 TE readings, and you want to see if they are statistically greater than some value. So we would have a null hypothesis of 94% and an alternative hypothesis of greater than 94%," Patty said.

Patty went to her white board and wrote it out:

“Let’s assume that the mean of the hundred readings is 100% and the standard deviation is 10%,” she continued.

“That’s just about exactly what the data were,” responded Mark.

Patty entered these data into Minitab and obtained the following output: 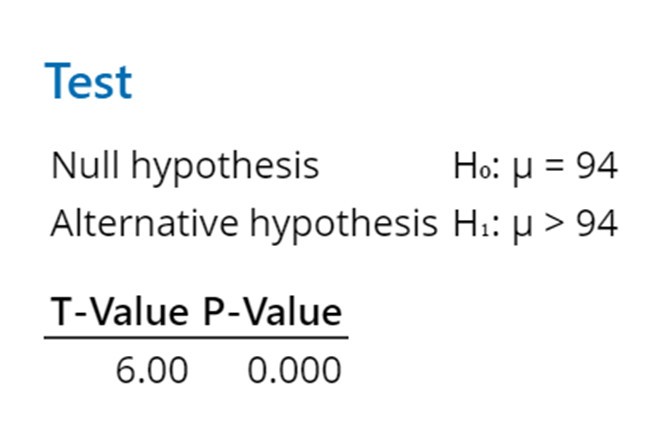 “So we reject the null hypothesis and conclude that the mean (i.e. 100) is statistically greater than 94%,” said Patty.

“Let’s use Minitab to plot a graph of the normal distribution, with a mean of 0 and a standard deviation of 1 and see where 6 is on the graph. The 6 is equivalent to a T- Value of 6 (or a Z-Value if the sample size is large, say over 400),” Patty said. See Figure 1. 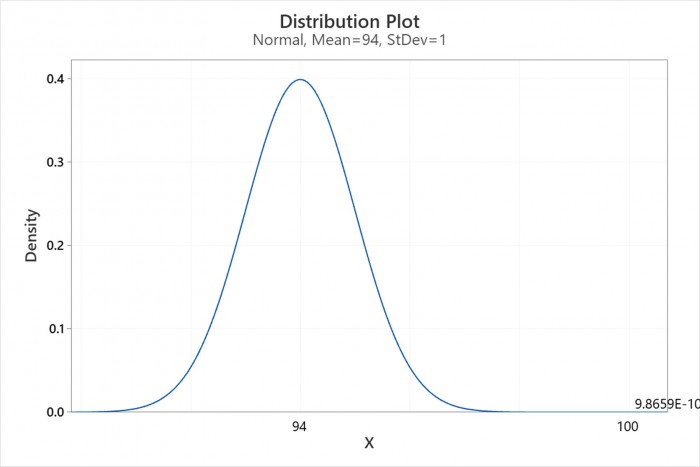 “It ends up that even this graphing function calculates a value of P-Value of 0 for T, or Z, values greater than about 8,” Patty confirmed.

“Yikes, so Mike might still chew me out if the T value is 8 or more,” Mark moaned. 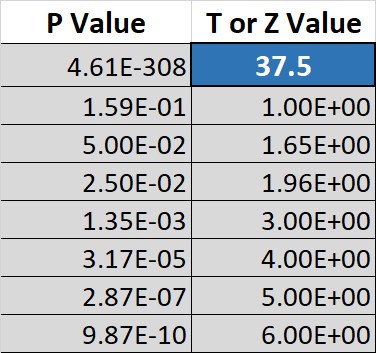 Mark asked hopefully, “so I can have the Excel® spreadsheet and if I ever have to go beyond T =37.5, you’ll help me, right?"

“Sure thing,” Patty said. “Oh, and don’t be so intimidated by Mike Madigan... he’s really just a big Teddy Bear,” she teased.

At that they both chuckled, though Mark not so convincingly.

Patty’s integration of the Gaussian Normal Distribution function to the complimentary error function is below. Readers who would like a copy of the Excel® spreadsheet that calculates P values can send an email to rlasky@indium.com.


In Hypothesis Testing, the P Value Can't Be Zero.